Lindsey Stirling Wikia
Register
Don't have an account?
Sign In
Advertisement
in: Songs, Shatter Me songs, Released songs,
and 5 more

"Take Flight" is the eighth track from Lindsey Stirling's second studio album, Shatter Me. The orchestral version of Take Flight is a bonus track only available on the Target and iTunes deluxe edition.

Stirling performed Take Flight for the first time on April 29, 2014, at Barnes & Noble in Los Angeles.

On the Brave Enough Tour and the Warmer in the Winter Christmas Tour the song was occasionally performed during the VIP soundcheck.

The official YouTube video was released on March 23, 2015. The music video was produced for the YouTube Music Award's 2015, and was Stirling's first video not to feature a violin onscreen.

The behind-the-scenes video was released on March 29, where Stirling explained the meaning of the song. 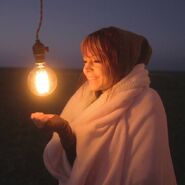