During a twitter livestream in 2016, Stirling explained the inspiration behind First Light:

On the official booklet of Brave Enough, Stirling explained that every song represents a step "a step that has taken me from being a heartbroken lost girl, wishing for bravery, to a woman who is ready to answer the call of something wild."

"Meditation, dreaming, prayer, visualization - whatever your technique, begin each day by creating your own destiny."

Stirling performed First Light for the first time on July 6, 2018, at the Starlight Theater in Kansas City, Missouri.

First Light was part of the setlist of the Summer Tour and the Artemis Tour from 2018 to 2019. 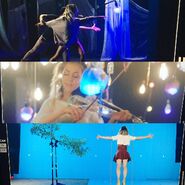