Lindsey Stirling Wikia
Register
Don't have an account?
Sign In
Advertisement
in: Songs, Released songs, Shatter Me songs,
and 7 more

Beyond the Veil (song)

"Beyond the Veil" is the first single of Lindsey Stirling's second studio album Shatter Me. The song was released on iTunes on March 24, 2014, and topped the Billboard Classical Digital songs chart for the first four weeks.

This single is the first in the track list of the twelve songs that conform her second studio album and, according to Stirling, it was the first song she composed on her album.

Stirling performed Beyond the Veil for the first time on April 22, 2014, at Universal Studios in Los Angeles.

On May 18, Stirling perfomed Beyond the Veil at the Billboard Music Awards. And on September 23, Stirling performed the song at the Meredith Vieira Show.

Beyond the Veil was part of the setlist of the Shatter Me Tour, The Music Box Tour and the Brave Enough Tour from 2014 to 2017.

The official YouTube video was released on March 25, 2014. The video proved to be a success as it accumulated half a million views in its first day.

The behind-the-scenes video was released a week later, on March 31, where Stirling explained the message of the song and its composition. 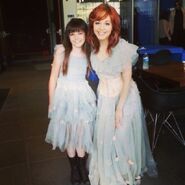 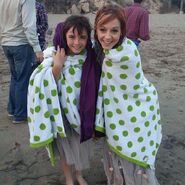